Casa Alma is situated on Calle Celsi: a quiet, peaceful cul-de-sac in Castello, the most popular residential area of Venice and historical home of the shipbuilding community.

This is the ideal Venice Biennale apartment, within easy walking distance of the main exhibitions in art, architecture, dance and theatre at the Arsenale and Giardini. If film is your passion, it’s a short vaporetto ride to the Venice Film Festival on the Lido.

Other local attractions include Venice’s Naval History Museum, where you can chart the rise of the Serenissima’s maritime empire, and the glorious church and public space of Santa Maria Formosa. A 10-minute walk will take you to the historic hospital and church of SS Giovanni & Paolo. A stone’s throw away is the marvelous Santa Maria dei Miracoli, in the neighboring area of Cannaregio.

In the midst of historic Castello, you can find traditional floating fruit and vegetable markets together with convenience supermarkets and a host of wine-bars, snack bars, restaurants and cafes en route to SS Giovanni & Paolo, grouped around the Via Giuseppe Garibaldi, or on a variety of routes to the Rialto and Piazza San Marco.

Please use the interactive and downloadable maps, or sign up to our newsletter to discover more information about Castello, and some of our recommendations. 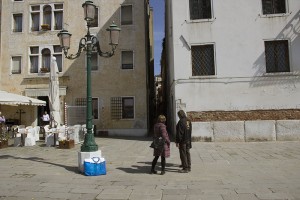 Arsenale Waterbus Stop
This is the easiest route to reach Casa Alma for the first time. Download our pdf photo-map here if you need it. Alight/walk to at the ARSENALE waterbus stop – then look for this cast-iron lamppost and enter the tiny alley in front of you – the Calle Dei Forni. Then follow our map, or yours, or download a gps app, or just ask everybody you meet!
Download our map. 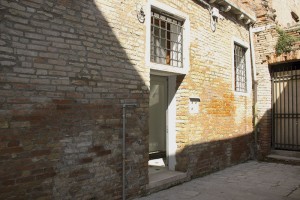 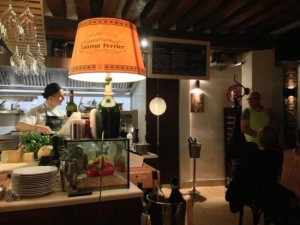 Ristorante Il CoVino
Andrea Lorenzon runs this lovely, small wine bar and restaurant. A minimal web presence adds to the exclusivity: you have to be in the know to find this one. Booking is advised. Prices are medium-to-up market. Closed on Tuesday all day and Wednesday lunch.
Ristorante Il CoVino website 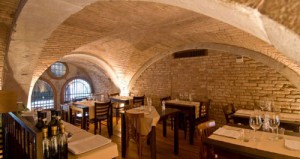 Osteria Bancogiro
We have a special fondness for this small Venetian Osteria. It serves excellent and interesting combinations of traditional dishes with fresh seasonal ingredients in a beautiful location behind the fish market, with a lovely terrace overlooking the Grand Canal for summer lunches. Booking is advised. Prices are medium-to-up market.
Osteria Bancogiro website 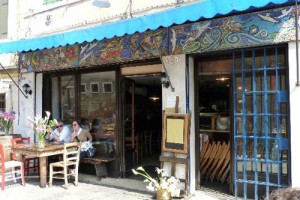 Osteria Paradiso Perduto
An authentic, cultish and often crowded bar and restaurant on the canal-side in Cannaregio: specialising in seafood, but with a good live music programme in jazz, blues and world. You have to pick your time and sometimes have plenty to spare, but we’ve had good experiences here.
Osteria Paradiso Perduto website 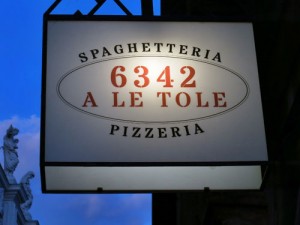 Spaghetteria: 6342 A Le Tole
Great, mid-price all round restaurant with home made pasta dishes, pizza and authentic pan-Italian dishes. Consistently good reviews on trip advisor give a sense of professional standards. It’s fairly small, so bookings are advised in high season. 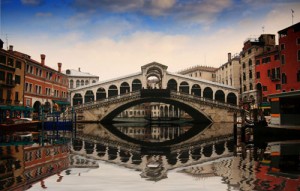 Rialto Bridge
The single span stone bridge designed by Antonio da Ponte, was completed in 1591, replacing a similar wooden bridge. On either side of the portico, the covered ramps carry rows of shops. The audacious engineering of the bridge has defied its critics to become one of the architectural icons of Venice. 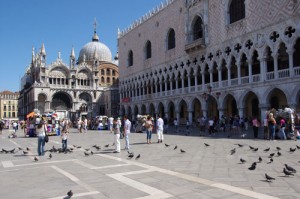 St Mark’s Square
One of the best-known and most visited public spaces in the world and historically the social, religious and political centre of Venice: including St Mark’s Basilica, The Doge’s Palace, The Campanile (bell tower) the Clock Tower (Torre dell'Orologio), Florian’s café and lots and lots of pigeons! 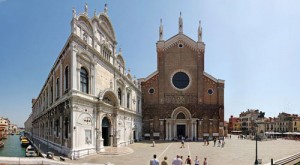 Santi Giovanni e Paolo
One of the largest churches in the city, it has the status of a minor basilica. After the 15th century the funeral services of all of Venice's doges were held here, and twenty-five doges are buried in the church. The bell tower has 3 bells in D major. Adjacent to the church is the Hospital, which is a must-see. 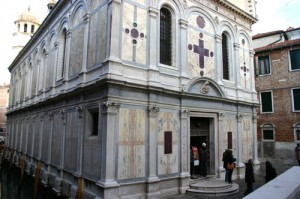 Santa Maria dei Miracoli
Built between 1481 and 1489 by Pietro Lombardo in the sestiere of Cannaregio, to house a miraculous icon of the Virgin Mary, the church is also known as the "marble church".  The recent ten-year restoration included washing the marble cladding in distilled water as it contained 14% of salts, and was on the point of bursting. 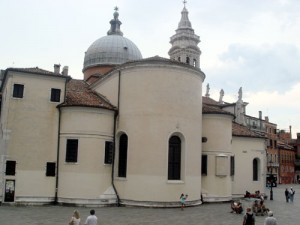 Santa Maria Formosa
Santa Maria Formosa was erected in 1492 under the design by Renaissance architect Mauro Codussi on the site of a former church dating from the 7th century: one of the eight founded by San Magno. The name "formosa" relates to an alleged appearance of the Holy Virgin disguised as a voluptuous woman. 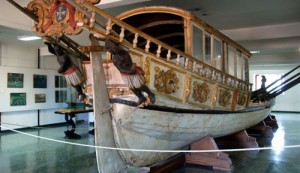 Historic Naval Museum
The Museo Storico Navale is near to Casa Alma and the Arsenale, in Castello. The Italian Royal Navy established the museum in 1919. Its collections include items relating to the naval and maritime history of Venice, and it has a large number of model ships and weapons on display. 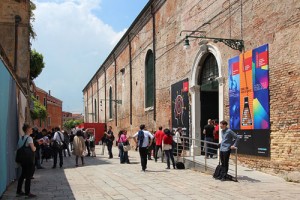 Venice Biennale: Arsenale
50.000 square metres of the South East area of the Arsenale have become the stable site of the Biennale activities since 1999, with exhibition spaces such as: Corderie, Artiglierie, Gaggiandre, Tese Cinquecentesche, Tese delle Vergini. Live performances take place at the Teatro alle Tese and at the Teatro Piccolo Arsenale, part of the complex. 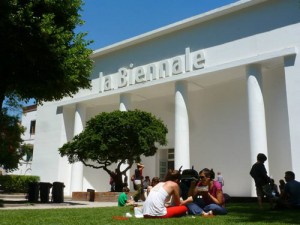 Venice Biennale: Giardini
These gardens in the east of Venice have been the traditional venue for the International Art Exhibition since 1895. They were laid out during the Napoleonic era, on land that had once been occupied by a district that included four churches and three convents. The area hosts the Central Pavilion and a further 29 national pavilions, built at various periods by the participating countries themselves. 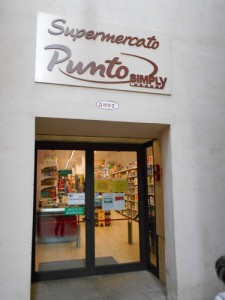 Supermarket Punto Simply
This is the nearest, medium-sized supermarket to Casa Alma (5mins walk) and stocks most basic things you’ll need for cooking. 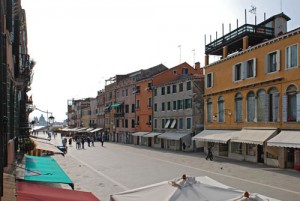 Supermarket Co-op
If you’re heading down to the Giardini, then you’ll pass by Via Garibaldi, the widest street with the biggest variety of shops (and banks) in Castello. The co-op is a small, often busy, but well-stocked supermarket for basic needs, about half way along the street. 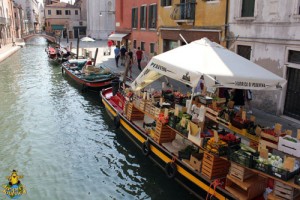 Floating fruit and vegetable boat
One of the last two remaining areas in the city where you can buy fruit and vegetable directly from the boat, popular with both residents and tourists alike, and indeed the logo image for Casa Alma. There’s a decent local fish shop right next to the boat. 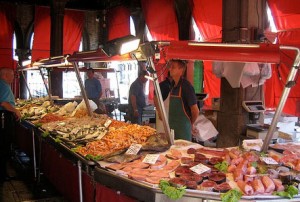 Fish Market
The Neo-Gothic Rialto Fish Market is a Venetian institution, a shrine visited by foodies from all over the world, featured in innumerable TV documentaries and films. A must.
Trattoria da Jonny
Just opened in Spring 2015, but Google the name and customer reviews in every language all say the same: great place, full of locals, friendly owners, tucked away in the back streets, a real find etc... This one's become a firm favourite of guests at Casa Alma: and we trust our guests impeccable tastes!
Address
* Campo delle Gatte 3210
* 30122 Venice, Italy
Phone+39 041 296 0065
Trattoria da Jonny website

*to zoom back out from street view to the map, please click the cross (x) in the top LH corner.

Whether you’re arriving by air, bus, train or car: you’ll finish your journey by boat and on foot. Around 10 days before you arrive we’ll send you personalised directions, up-to-date timetables and further information tailored to your individual booking and point of arrival.

Please e-mail us previous to this if you’re arriving at night, or by ferry from Punta Sabbioni or Treporti.

Venice Water Taxi direct from Marco Polo airport will get you the closest to Casa Alma in the least amount of time. They cost around € 120-140 one-way for the boat, for up to 10 passengers and luggage. The stop you need to ask for is Piscina San Martin on the Rio San Martin. When you alight, turn left into Campo Do Pozzi, and then follow our PDF photo-guide. You can book on line in advance, but the taxis run regularly from the airport.

Casa Alma recommends the Venezia Unica on-line service. It is the simplest way to tailor a single card to your personal needs. You can choose to have just public transport, or public transport including the shuttle-bus to Marco Polo Airport, or a combined card with museum and church entry.

Visit Venezia Unica before travelling and choose the card that suits you. You will receive a reservation code (PNR) and voucher by e-mail. You then collect your card by entering your personal PNR booking code at one of the ACTV automatic ticket machines or by presenting your voucher (PNR booking code) at one of the many Points of Sale and Collection in the city.

N.B. The card does not include entry to the Venice Biennale of Art or Architecture, or the Alilaguna boat service from the airport.